Research done by World Agriculture revealed that farmers in Uganda experience institutional constraints in enforcing contracts; these factors lead to difficulties in efficiently fulfilling contractual agreements. They also pose particular problems for the supply chain development needed for agricultural industrialisation. This is aggravated by poor rural roads and storage; poor access to information, particularly about markets and prices, lack of access to new technologies, and asymmetrical power relationships between farmers and agribusiness firms.

Henry Kaliisa, Founder, AgroDynamics Ltd attributes some of his business success to contract farming but the journey has not been easy. He has had to come up with innovative ways to make the process more effective for the players involved: smallholder farmers and commercial companies.

When Henry Kaliisa first ventured into sorghum farming, the seed varieties available in the market were mostly planted for subsistence use and not commercial farming. His first yield fell way below expectation but this prompted him to read and research on the sorghum industry with a focus on countries that were successful in the commercial farming of white sorghum.

That is when he realised that he did everything right the first time but what let him down was the variety of the seed.

Henry’s research led him to Chromatin Inc., a company in the United States who sent an improved sorghum hybrid seed that farmers in Uganda piloted and found more yielding than the indigenous breeds.

“I realised the real potential of this industry and how the right variety of seed would change the brewery industry. I involved Uganda Breweries Limited and Ministry of Agriculture through their departments responsible for crop activity and we singled out the varieties that worked well with our soils,” Henry said

Henry admits that the seed they use is the best quality in the market. Through his research, he tried and tested all the available varieties and picked the best,

“Sorghum has been growing in Africa for ages. There are some local varieties we have here in Uganda but once the breweries tried the new variety we introduced to the market, they realised what they were looking for in terms of extraction(s) which were better achieved.”

One thing AgroDynamics hopes to achieve is to shift the mindset of farmers from the subsistence way of doing farming into the commercial way. An effective and cost-effective way to do this and cover more ground while still impacting farmers was through contract farming.

Robert Lakidi, one of the farmers who has benefited from this initiative working under Nobel Farms (U) had this to say,

“This variety of seed is better. The money I use to maintain the crop until harvest is much less compared to other crops. This seed also matures faster.”

Dealing with side selling and other challenges

However, this process has a lot of shortfalls and gaps which present many challenges for the businesses working with the farmers.

“I realised several issues such as illiteracy among farmers, corruption, and side selling which was so common among contract farmers. Farmers signed contracts without understanding what the contract entails just to get support from businesses and once they get yields; they dishonor the contract by selling to other buyers,” Henry admitted.

This affected Agrodynamics a little in the beginning, but Henry started exploring various solutions that would make contract farming smoother for him and other agribusinesses.

Using the knowledge from his BSc. in Computer Science and IT, he talked to a former classmate who was actively practicing IT, provided him with a concept and they came up with a solution that can be used to manage the process better.

That is how the Agro Tracker app was born.

“I wanted to better learn and understand farmers, their challenges, location, planting dates so that I could come up with the best solutions. There are so many variables in the process, and I wanted to design a system that would keep track of all variables so that it keeps us on top of our game when dealing with farmers.” Henry said.

Through his analysis of the challenges brought by contract farming, side selling was the major issue that businesses working with farmers had to deal with. Henry realised this came about because most businesses would not maintain regular checks with the farmers during the planting season. Some businesses did not even know where some of the farms were located and were not fully involved in the process from planting to harvesting.

The Agro Tracker app is an agribusiness information system that enables Agrodynamics and other such off-taker schemes to monitor plant activities in real-time and using this data, they are able to support farmers better by providing them with guidance on what they can do to have a successful harvest.

What is exciting about the Agro Tracker is that it is flexible enough to be used by other types of agriculture, livestock, and agribusinesses.

Another solution Agrodynamics has embraced under its specialised IT arm, Temsoft Limited to counter side selling is organizing farmers into farmer groups/clusters. They actively involve the chairpersons and treasurers of local farming co-operatives in creating contracts with farmers and use an incentive system where they reward farmers who follow through with their contracts and give fines to those who don’t.

According to Henry, this has seen side selling go down by 85 to 90 percent when using the Agro Tracker. 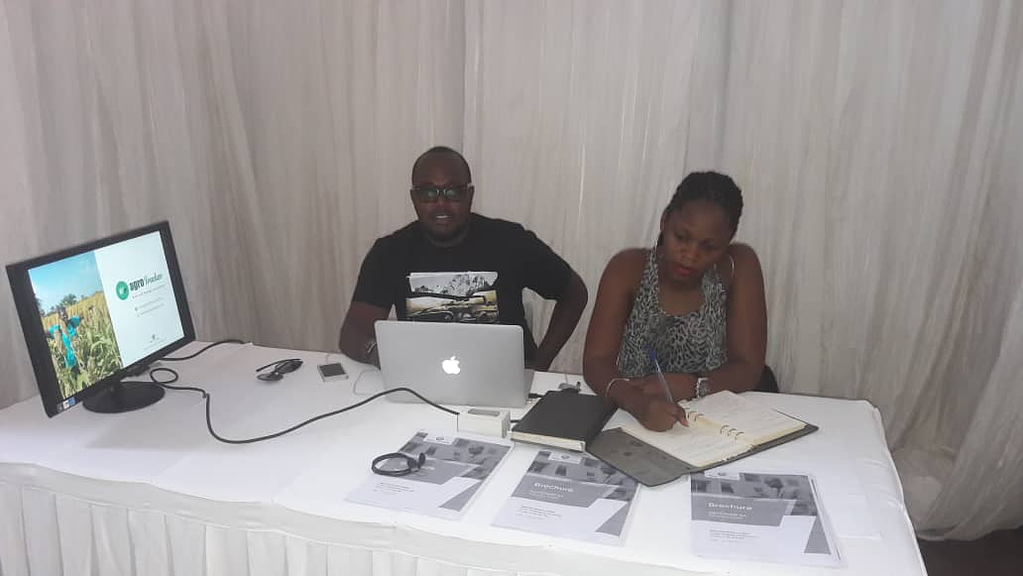 Henry Kaliisa with Caroline Kamukama his wife and Co. Director at Agro Dynamics Limited. Caroline has played a crucial part in the success of the business.

What Henry considers a great achievement is disrupting the brewery industry in Uganda in a positive way and improving yields of the entire sorghum industry as well.

“Breweries are happier, farmers have better yield and through our out-grower scheme we have worked with thousands of farmers across Uganda who we’ve impacted directly and their families over the years,” he said.

They also partner with breweries and foreign partners to train farmers, so their skills are upgraded. In 2018, Agro Tracker was recognized as one of the best ICT solutions in the agriculture industry.

Value from the GrowthAfrica Accelerator

Henry came across GrowthAfrica as he read about opportunities to gain valuable training or education and the GrowthAfrica Accelerator programme stood out for him.

“GrowthAfrica was like business school for me. The education system we have does not provide in-depth practical tools/strategies to specialize in which was different with GrowthAfrica. I learnt better business planning and processes which I worked on with my team. I learnt about product prioritization, brand identity, how to align my value proposition, understand my customers and analyse products,” he said

Henry’s advice for entrepreneurs is to gain experience in their industry, further their knowledge and hire professionals to help when needed.

On investment, his advice is for entrepreneurs to borrow only if they must,

“There is an influx of foreign investors in form of venture capitalists and venture debt. Always ensure there is a clear exit strategy for investors and do not give up majority of your company because investors will not invest in a business they don’t believe in or that is not worth their time.”

What is in the future?

“I see Agro Dynamics Limited leading the region in the sorghum sector. I see us providing very versatile ICT solutions in agribusiness. I also see us bringing to life other products that can come out of sorghum with a keen focus on clean energy. Sorghum produces ethanol which is an alternative source of clean energy.” Henry concluded.

GrowthAfrica is hiring: We’re looking for you to fill this seat