GSMA Ecosystem Accelerator this week released a research report highlighting the rise in the number of tech hubs in Africa from 314 in 2016 to 442 in 2017. Tech hubs, as described by GSMA are physical spaces designed to foster and support tech start-ups”. These include incubators, accelerators, co-working spaces, fab labs, makerspaces, hackerspaces, and other innovation centres.

According to the research conducted in 2017 on the same, although 50% of the tech hubs are concentrated in 5 countries (South Africa, Kenya, Nigeria, Egypt and Morocco), almost each of the other African countries have at least one or two active tech hubs. This year’s research reveals that South Africa remains at the top with 59 active hubs, up from 54 in 2016. Following closely is Nigeria with 55 active hubs up from 23- a notable improvement from last year, Egypt with 33 hubs up from 27 and Kenya with 31 up from 27.  Abidjan in Cote d’Ivoire has gradually positioned itself as the new catalyst of innovation across Francophone Africa and has seen its number of active tech hubs double. Zimbabwe (13) and Uganda (16) led the way in ‘tier 2’ ecosystems in Southern and East Africa respectively. 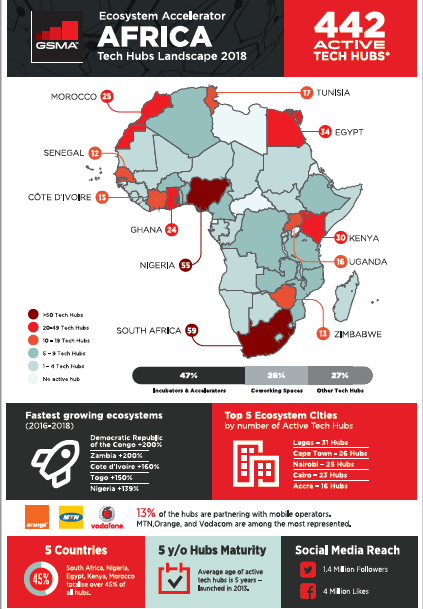 The report highlights that the last couple of years have also been characterised by the rise of tech giants’ interest in the untapped opportunities of African markets. CEOs including Mark Zuckerberg (Facebook), Sundar Pichai (Google), and Jack Ma (Alibaba) visited major hubs from Lagos to Nairobi, corporate partnerships mushroomed and players including Amazon and Alibaba increased their presence all across the continent. 13% of the hubs are also partnering with mobile operators- Orange, MTN and Vodafone being the key stakeholders.

Finally the research points out that the increasing preference for flexible business models for start-up support, investment and the reconfiguration of the working space have produced a global spike in co-working spaces and incubation programmes which is not expected to slow down in the near future. As to the rise of incubators and accelerators, the high uncertainty of one-size-fits-all programmes has led to the rethinking and reshaping of business strategies and models according to targeted market structures and industries.

How Microsoft’s MySkills4Afrika is impacting small businesses in Africa

Why culture is the foundation for all businesses