A report by the African Union stated that, ‘Africa’s honey and beeswax production is estimated to be less than 10 and 25% of the world production respectively, a situation that is attributable to the fragmented nature of the beekeeping sector in Africa, which is characterised by low productivity, poor quality, inadequate technical personnel, insufficient research, low adoption of improved technologies, and ineffective control of pests and diseases among others.’

George Mugula identified this gap as an opportunity to improve the beekeeping industry in Uganda and create a positive impact among bee farming communities.

How it all started

When George Mugula was employed in a bee keeping farm, he had no idea that his next business idea would come from that experience. He worked for Simon Turner, an Australian bee keeper who founded Malaika Honey in Uganda and through their interaction, getting opportunities to go to the field with him and interacting with other beekeepers, he picked a lot of interest in the subject of bee farming.

“Every time I went to the field with my boss, I realised there were a lot of opportunities and gaps in the bee keeping industry. Many farmers had products but did not know where to sell. There was also a gap in input supplies in form of bee equipment which were scarce at that time. To me, that was a big opportunity that I decided to leverage on,” said George. 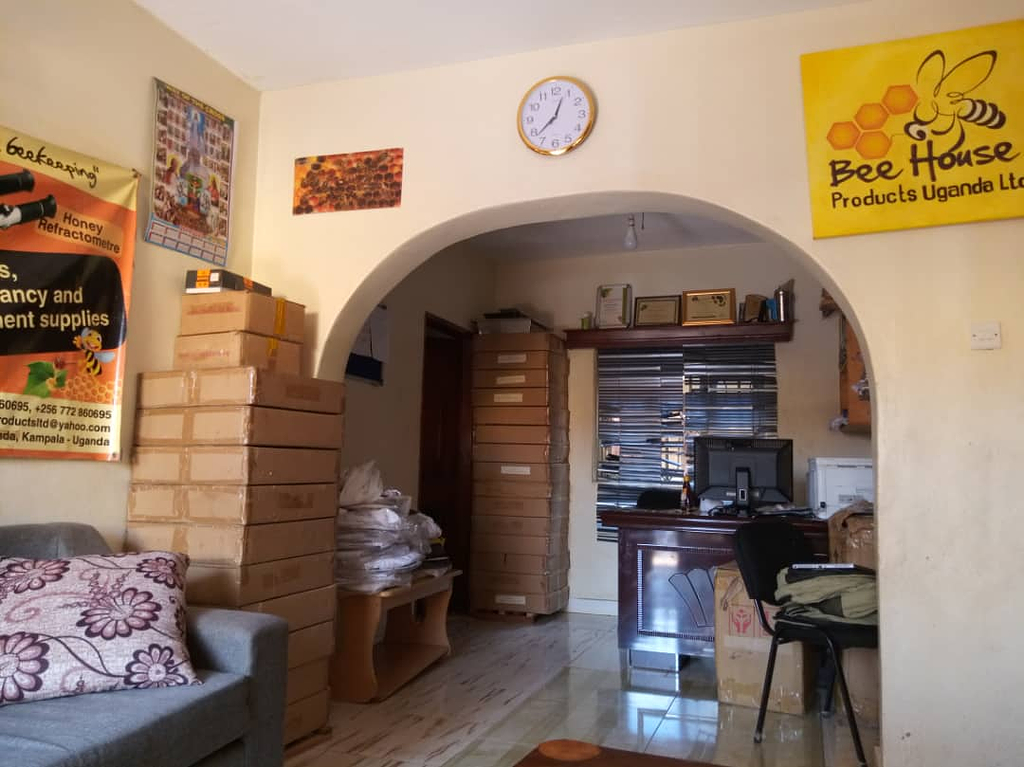 George admits that when he started Beehouse Products Ltd, he wanted to establish a place where customers could access all products and services related to bees.

They process and pack both multifloral and single flower honey, bees wax, propolis and bee venom. They also sell all products related to bee harvesting such as protective wear, hive tools, bee brushes, beehives and smokers.

Besides the products, Beehouse also offers some services including installation of hives, bee removal from areas where bees have invaded living spaces, training and consultancy.

George noted that NGOs, the government, bee farmers, hotels and supermarkets are his target market.

An interesting market that he is trying to tap into though is pharmacies, clinics and hospitals,

“Reaching out to pharmaceuticals has been quite a challenge because many of them are not used to products such as bee venom and propolis that are natural antibiotics and have a lot of health benefits. They need a lot of scientific proof that these products have real benefits.”

The propolis they locally produce has had better reception in the market. Compared to the imported propolis, George admitted that customers prefer their propolis. 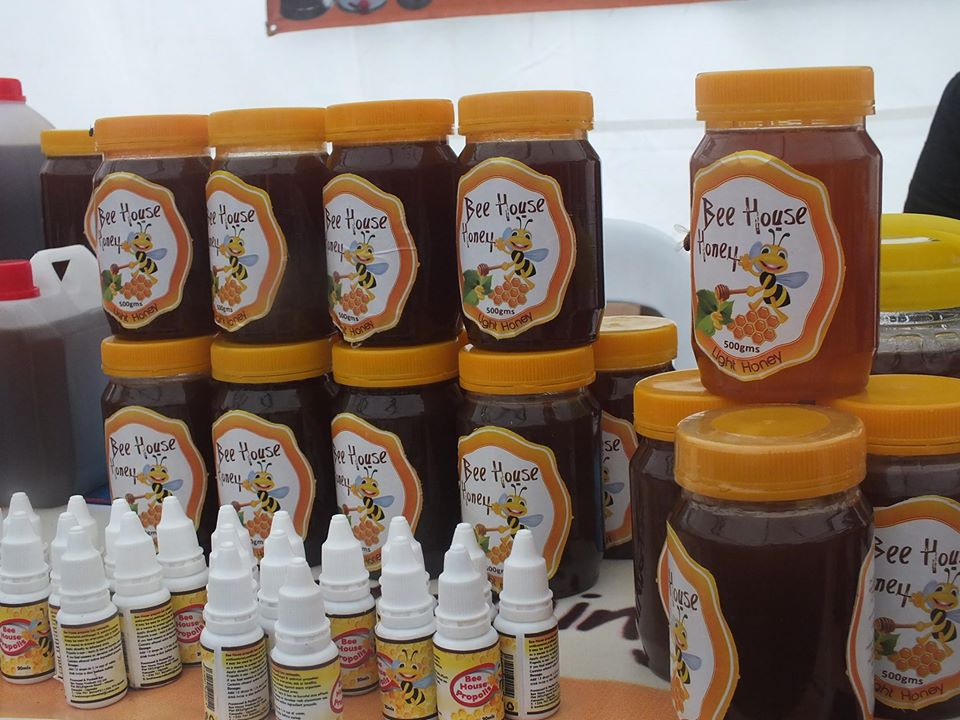 Reaching out to their target market

Sharing honey samples with supermarkets and hotels has helped them have their honey stocked in various places.

Once in a while, they advertise in newspapers, participate in radio talk shows and TV features which has built their brand presence and helped them reach more customers in Uganda.

“We are also finalising on our website which is going to be a good tool for us to use in marketing. We currently are leveraging on our facebook page and whatsapp groups to market online.” George said.

He also admits that networking has been a powerful marketing tool for Beehouse Products Ltd. They are part of a number of networks such as the African Agribusiness Academy and the Uganda National Apiculture Development Organisation which has raised their profile in East Africa.

Since 2010, Bee house Products has grown to impact communities all over Uganda and empower bee farmers in the country.

In Mubende, Nakaseke and Nakasongola districts, they have provided training to over 1000 beekeepers with help from Swiss Contact.

“We have noticed an increase in production among the bee farmers we trained, some of them growing from producing 1 tonne to 3 tonnes of honey. We have also helped set up a honey collection centre in Aleero village in Nywoya District which has made it easier for farmers to get a market for their honey,” he said. The project named Biodiversity Marching Facility is funded by Wood en Daad through the Uganda Apiculture Development  Organisation.

In 2019, they partnered with Wood En Daad to run a 3-year project for bee farmers in Karamoja District. Through the project named ‘Bee Champion’, farmers are linked directly to processors, eliminating middlemen. The farmers are also trained on how they can improve their production and they are supported with honey harvesting equipment. 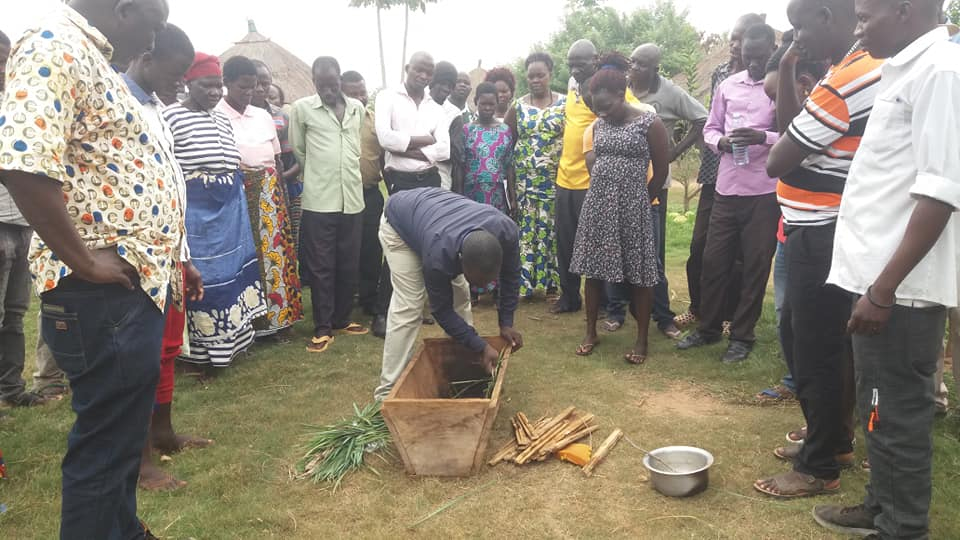 Recently, Bee house Products came up with a model to help resolve human animal conflict in two areas. Elephants had posed a huge problem to the areas of Diima and Nyamasa parishes in Kiryagondo District. They destroyed people’s crops and gardens leading to public outcry among the community members.

“Through a partnership with the Wildlife Conservation Society, we put up bee fences in the two communities which prevented the elephants from invading their crops, contributing to solving the conflict,” he said.

Bee house Products has also partnered with the Private Sector Foundation to facilitate trainings in production, harvesting and value addition to bee farmers in Kamuli District. 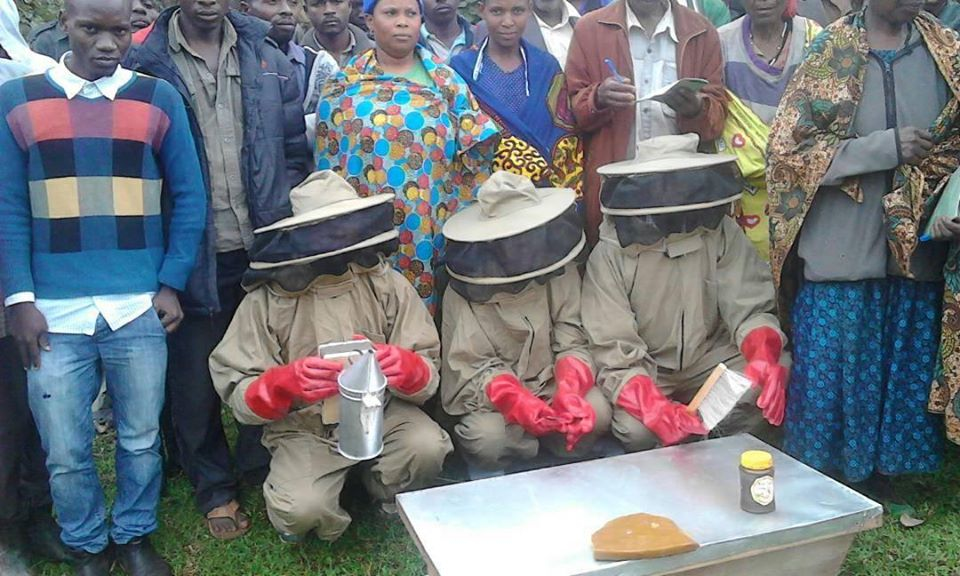 The biggest challenge they face in the business according to George is access to finance. In most cases, they get contracts or LPO’s that require them to use their own money to deliver the products/service then get paid much later. There are situations where they do not have the money at hand and have to rely on money lenders for loans which also presents its own challenges.

Experience in the GrowthAfrica Accelerator

“When we first heard about GrowthAfrica, we thought it was going to be an opportunity to access finance, but we later realised it was a lot more than that. GrowthAfrica gave us an opportunity to learn about how we can better run the business, attract customers, improve on our leadership skills and create an organised structure within the organisation,” he said.

Some of the practical lessons that George has implemented in Bee house Products are: clearly bringing out the mission, vision and objectives of the organisation which was not the case before, understanding who their target market is and creating strategies that will better attract them and coming up with goals and targets for the staff.

“Most entrepreneurs are very eager to grow extremely fast in the shortest period of time. My advice to fellow entrepreneurs is to embrace the process and be patient,” said George.

Beehouse Products plans to purchase land and establish a workshop. One of their partners, Wood En Daad has committed to supporting them in buying a multifunctional wood machine for making beehives. This machine will fasten the process of making beehives and increase their output. 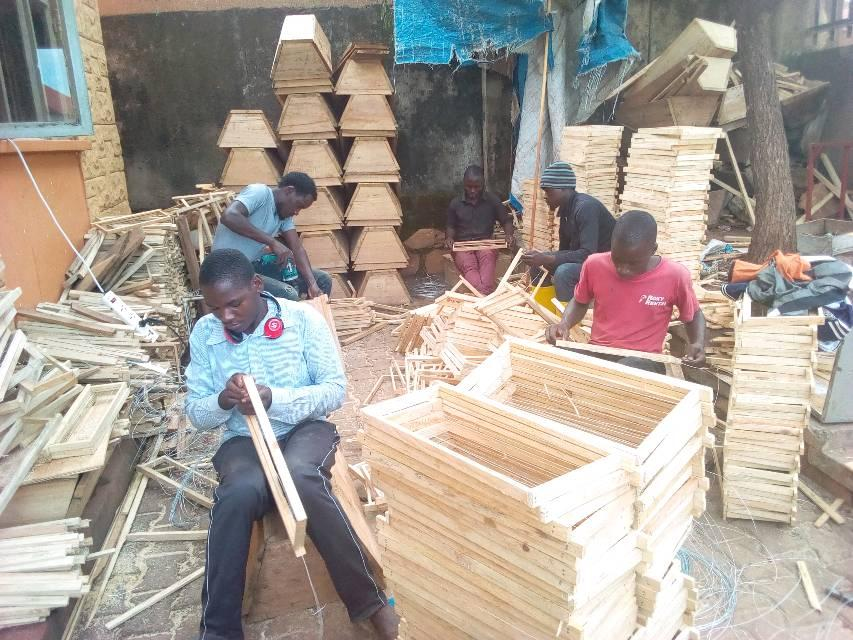 Part of the team at Bee House Products making beehives

George also admits that their focus over the next few years is implementing the projects from the new partnerships they formed last year and maximising the impact to bee farming communities in Uganda.

An unfortunate loss of life inspires a solution that has impacted the health sector in East Africa: ClinicMaster International