For the longest time, Ugandan farmers have had to suffer painful losses resulting from being sold fake farm inputs by dishonest agrodealers.

The Economic Policy Research Centre Uganda conducted a survey in 2014 where mystery buyers/ shoppers were sent to 360 randomly selected shops across the country to buy small portions of the most prevalent modern inputs: urea and improved maize seed.

“The implication is that the quality of a bag of hybrid seeds in shops is as good as mixing half a bag of guanine hybrid and half a bag of farmer’s seed,” Dr. Swaibu Mbowa, a Senior Research Fellow at the Economic Policy Research Centre (EPRC) said.

“I wanted to have a consistent supply so instead of relying solely on farmers, I decided to grow my own produce. I went to a popular seeds shop in Kampala, bought some inputs and planted. When it was time to harvest, I had the worst yield, I barely had any produce,” Naika said.

Falling victim to fake inputs from fake agrodealers was an extremely frustrating experience that motivated him to create a solution,

“I realised I wasn’t the only farmer affected. I asked other people and they all had similar experiences. Farmers were lucky to even get 50% yield from the inputs they bought. That is when it dawned on me that to solve this problem I had to start from the root of the problem. So in 2016, I rebranded Naiken Foods to Famunera.”

Breaking the cycle of fake inputs in the market

Famunera is an agribusiness marketplace that sources for genuine quality farm inputs from verified suppliers, delivers them to smallholder farmers and provides marketing for their produce in Uganda.

The name Famunera is strategic, it speaks directly to farmers as a way to give them hope that despite the bad experiences they had in the past, they can keep on farming. ‘Nera’ means again so the name is interpreted as ‘farm again’. 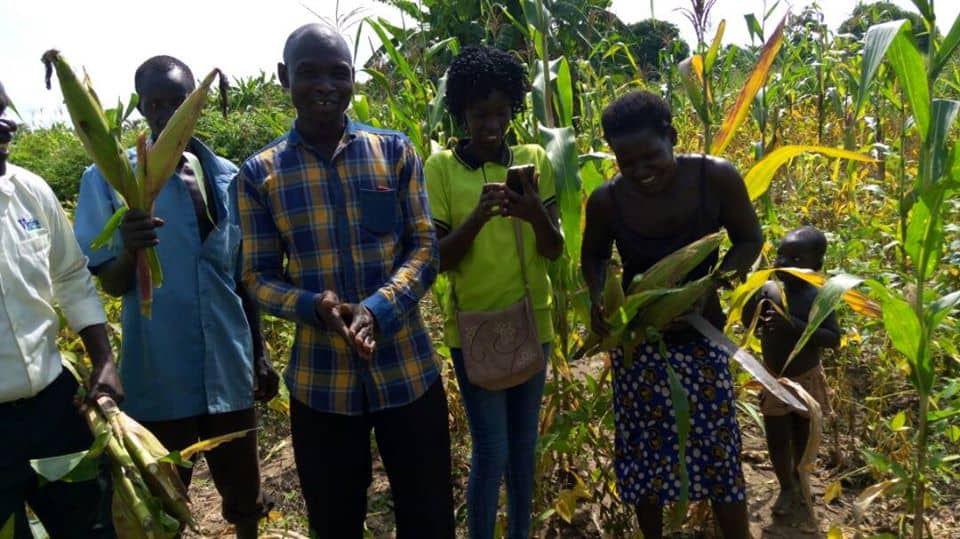 There are two channels Famunera uses to offer this solution,

Once the order reaches Famunera, they use an internally managed system with verified drivers of trucks and buses on all major routes in Uganda who ensure last mile delivery of orders for farm inputs to different farmers within one day across the country.

Enhancing the value chain to include food processors

Besides delivery of farm inputs from manufacturers to farmers, Famunera has created a value chain which connects farmers with food processors as well and this creates a ready market for farmers and ready supply for food processors.

This solution enables food processors to trace the quality of input used by the farmers to ensure it meets the quality standard and this assures them that they are buying quality produce.

Famunera also has a planner tool on the web application where farmers can create a shopping list of the inputs they will need for the next season, budget around it, create a project, track progress and get their inputs delivered.

As a value addition service to farmers, they also provide free agronomy/farming support.

Besides that, they pay for radio mentions once in a while, targeting programs with high listenership.

So far, Famunera has reached over 100,000 farmers in Uganda through radio, TV and farmer forums. Out of this number, 5,000 farmers have been directly served through the platform.

They work actively with farmer group leaders who have been a great support especially in organizing farmer forums in the country. In 2019 alone, they visited 17 districts reaching out to up to 5 sub counties in each district where they held successful farmer forum sessions to create awareness. Each session had an average 0f 100 – 200 farmers who were trained on how to grow their input through Famunera. 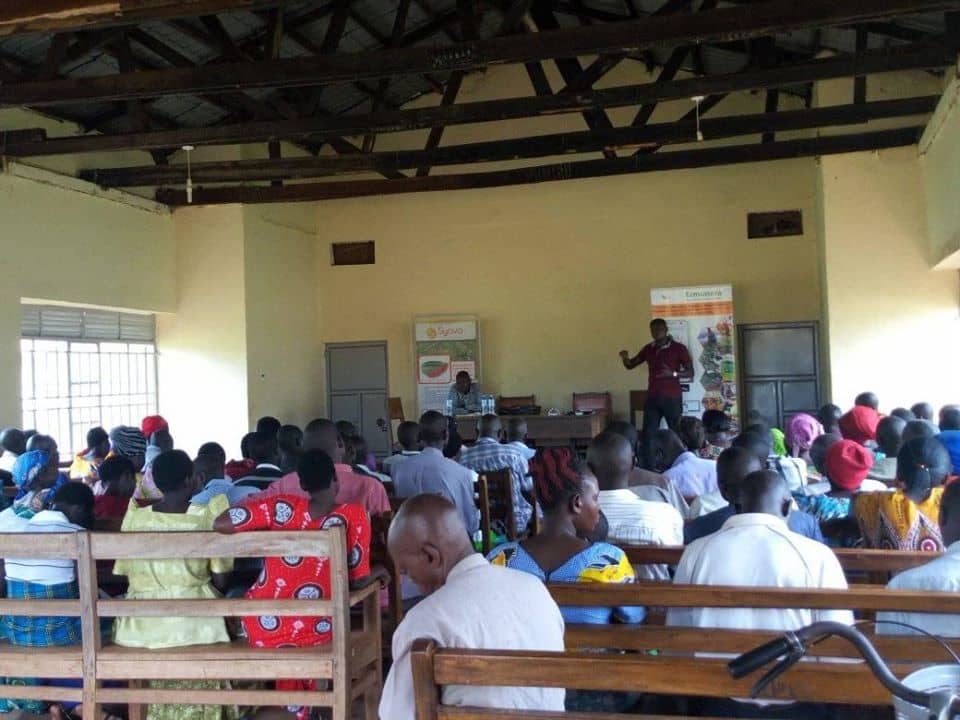 Naika Enock Julius addressing farmers during one of the farmer forums

Naika admits that financing marketing is the major challenge they face at Famunera,

“We know which channels to advertise on, but we are limited financially so we are not able to spend as much as we should on adverts in popular farmer stations such as Bukede TV.”

Getting the right investor has also been a challenge for Naika,

“We have engaged with investors who claim to be focused on early stage ventures but once we have a conversation, they say they’ll get back to us once we hit USD 100,000 net profit. It has been a challenge getting a genuine investor that we can partner with.”

“Through the GrowthAfrica Accelerator, I realized the gaps that existed in the business. It was more like a self-diagnosis of the business that exposed me to specific changes I needed to make for Famunera to grow,” Naika said. 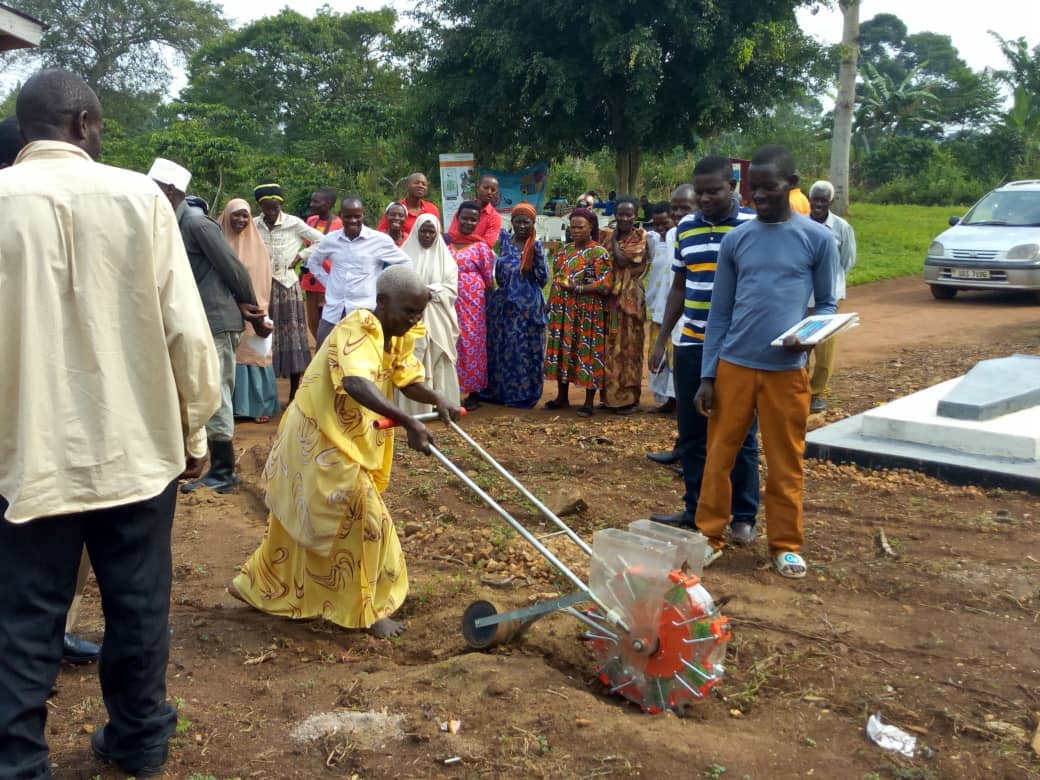 Some farmers going through a demonstration done by Famunera

Naika’s  advice for fellow entrepreneurs is to never lose sight of not only their vision but the plan to achieve the vision. Everything else will fall in place once you focus on the vision.

Future plans: being a major data centre for agriculture

Famunera’s focus for the future is to be the biggest data centre for the agriculture value chain. Naika recognises that data is key for key stakeholders in the agriculture industry and being a direct source for this data would be a game changer for the industry.

Naika also feels that the business is ready to partner with an investor,

“We have gotten this far by our own efforts but having support from an investor would take our solution to the next level.”

Meet the 10 most promising ventures in Uganda

Press Release: GrowthAfrica’s accelerator kicks off its 2021 cohort for business transformation in Pan-Africa